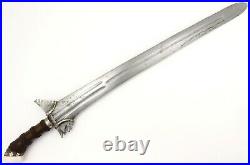 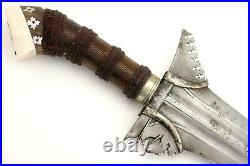 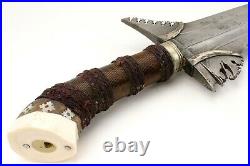 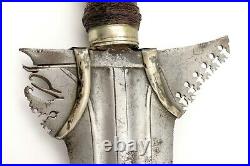 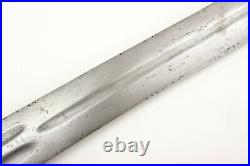 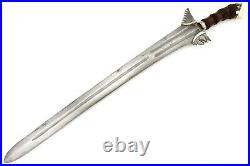 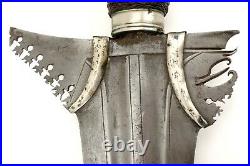 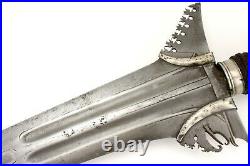 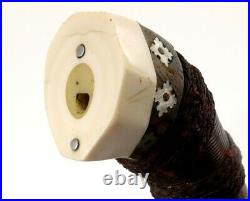 This is a classic sword of the Moro people of the southern Philippines and of the Sulu Sea are called a kris. The classic Moro kris is based heavily on the Indonesian keris but is distinctly larger and made purposefully for fighting. The kris has always been the most famous of all Moro weapons and there are a wide set of variation of blade types, handle forms, and materials. Generally all kris blades are wide at the base, double-edged, and can be waved, half-waved half straight, or straight in which case they were more practical in combat.

Older kris had fewer waves and the waves were deeper and wider. Over time the waves became shallower, tighter, and more numerous and therefore required greater skill to prevent the blade bouncing off or being stuck in an enemy's body. The higher number of waves meant the more potent the kris was intalismanic power such as this example. Sometimes engravings (often filled in with brass or silver inlay) are found on the blade in okir motifs vines, foliage, etc. Especially high quality kris for Datus, would have been made of rare materials and had blades of especially fine construction with lamellar steel or in some rare cases twist core blade forms. It is possible to differentiate between Moro kris and attribute to certain regions or ethnic groups such as the Maguindano, Sulu Moros, and Maranaos, based on the design of the blades and the fullering. In some cases, certain types of hilts and decoration can also indicate origin.

Hilts were in a variation of forms, with most hilts following a standard form with a stylized kakatua, or cockatoo bird, form. However other types of hilts exist with hilts shaped as stylized horse hoofs or round balls as well. This example in the Schmiedt Collection is an interesting example of a form called a horse hoof kris.

The blade is a fine straight fighting with three fullers in a pleasing pattern, two in the lower portion of the blade, near the ganja, and one in between running the remainder of the blade. First half of 20th century. Total Length (inside scabbard if present) : 27 1/4" Blade Length : 22 3/4". The item "VERY NICE PHILIPPINE MINDANAO HORSEHOOF MORO KRIS SWORD LAYERED STEEL BLADE" is in sale since Tuesday, May 18, 2021.

This item is in the category "Antiques\Ethnographic\Pacific Islands & Oceania". The seller is "arushunter" and is located in Richardson, Texas. This item can be shipped to United States.