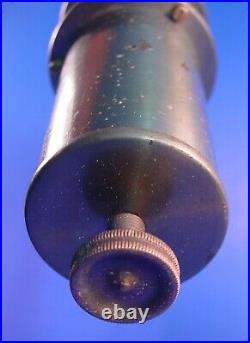 This is a very nice stick barometer by a little known American maker James Green. Seems to be in good working condition, measures about 39 inches long. I will add some more photos in a couple days. NOTE: A kind ebayer tells me I have some of the facts wrong and that this barometer is made in 1890 or later. Nicolas Fortin, an instrument maker in Paris in the early nineteenth century, introduced a mercury barometer with a glass and leather cistern so designed that the barometer could be safely moved from one place to another.

James Green began making Fortin-type barometers for the Smithsonian in the 1850s, though with a slightly different design to the cistern. This example marked HENRY J. Was made after 1890 James Green's nephew and successor moved to Brooklyn. Here is some information on the maker James Green. James Green, the son of Samuel and Sarah Green.

1876 directory Edward Meister advertises as successor to F. King came to New York in 1850 and continued to manufacture mathematical and philosophical instruments. The Federal Census of New York City, Ward 23, for 1880 lists James Green as 72 years old born in England.

Green Stick Barometer Late 19th Century, Very Nice Early American Example" is in sale since Sunday, February 16, 2020. This item is in the category "Antiques\Science & Medicine (Pre-1930)\Scientific Instruments\Other Antique Science Equip". The seller is "klony" and is located in Kalispell, Montana. This item can be shipped to United States.